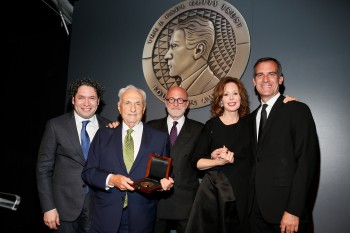 On Thursday night, Montage Hotel in Beverly Hills held one of the most intriguing evenings. In order to raise money and support for the development of The World's Jewish Museum. The mission is to accomplish going beyond people's preconceived notions of Jewish Museums.

On this night, one of the most well-known architectures was awarded a lifetime achievement award. Frank Gehry was included in building numerous multiple buildings. In essence, Disney Concert Hall and the Guggenheim Museum Bilbao in Spain are two of many recognized structures. Additionally, he will also be the architect for the World's Jewish Museum, which is to be built in Tel Aviv, Israel.

During his speech, he spoke about how being Jewish hand a major impact on how he creates and designs his structures that are work of heart. He told that it was his grandfather’s lessons that have stuck with him. His grandfather always read Talmud to him and that became his inspiration.

He believed that it was the curiousness of childhood that made him explore and develop newer, more successful things. As was depicted in Talmud, Gehry also developed a knack of curiosity in him. And, he attributes his position in the market today to that book his Grandfather read to him!

One of Gehry's latest work pieces along with Projectcore includes Mirvish + Gehry condos. This condo is to be built none like any other ever witnessed. The structure will rise up to 92 stories, which will make it the tallest residential building in Canada. You can find out more about this project here.

Both the towers of Mirvish + Gehry condos are different yet have reciprocal designs. The tower designs are to also for the history and the character of the surrounding neighborhood. They talk of complete luxury and grace.

This is exactly why Gehry is to design the World’s Jewish Museum. Later, the MC Howie Mandel went forward to say that it is a fantastic cause. He mentioned that when individuals think of something related to Judaism, Holocaust is one of the first things that comes to their minds.

And, that it is a pleasure to be a part of something that adds much more to the Jewish culture. He also appreciated Gehry a lot through his words and mentioned that it would be an honor to work with an icon such as Frank Gehry.

The support that was provided that night was in order to begin a brand new historic endeavor. The Museum is also being built to accomplish Jewish people through generations to come. At the end of the evening, a total of 6.7$ million dollars was raised. From which Los Angeles philanthropist contributed $5 million for the Museum.

This contribution would also entail him to name an entire room after his deceased wife name Joyce Gottileb Black. According to their projections, the completion of World’s Jewish Museum is to be in May 2023. The Museum is to include and recognize science, entertainment, are and medicinal accomplishments about the Jews.