The massiveMirvish + Gehry multi-use development slowly taking shape in the entertainment district of Toronto is one that has the entire Canadian development community buzzing with anticipation. And deservedly so.

When complete it will be a fitting tribute to the imagination and influence of native Torontonian Frank Gehry. The project as announced in 2012 was already ambitious in scope.

But it recently expanded just a bit more to include renovation of the 100 year old Eclipse Whitewear Building at John Street and King West. 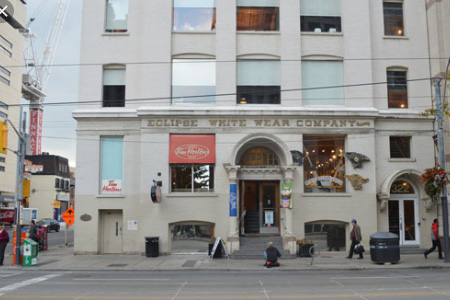 The renovation will be handled by Projectcore, one of the M+G developers and will entail transforming the former undergarment factory into a heritage art gallery.

As mentioned the building was not included in the original Mirvish + Gehry master plan submitted 7 years ago, but wound up being added at the insistence of the City.

Project manager Robin Ramcharan stated recently that while the building was originally overlooked, including it into the fabric of the larger development makes perfect sense in hindsight.

He envisions it becoming “an important part of the final scheme (that will) house the main gallery for Mirvish + Gehry Toronto”.

According to Ramcharan the renovation will preserve many of the Whitewear building’s original elements. It will also re-introduce historic elements that were lost in past renovations, including the John Street entrance.

It is hoped that by doing so the new gallery building will provide a contextual anchor for that part of the larger M+G project at street level.

Although there has been little visible progress on the overall Mirvish + Gehry project Great Gulf, lead developer on the project, has reiterated its plan for two towers of 92 and 82 stories designed by Gehry.

And indeed, presales for the units in those towers continues apace. The Eclipse Whitewear renovation is now envisioned to be a key component of the overall scheme. 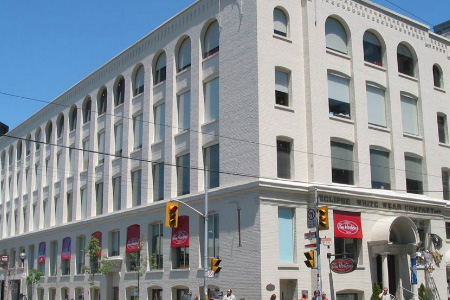 According to project manager Ramcharan the biggest challenge of renovating the Whitewear building will be to bring the structure up to code.

Much has changed in the realms of fire safety and more in the 100 years since the building originally rose. Bringing it into compliance with current regulations will require the introduction of new fire stairs among other things.

While great pains will be taken to preserve the historic character of the building the renovation will see the introduction of a number of new features.

For instance, a gantry crane will be introduced in order to enable large, heavy artworks to be lifted directly into the second floor gallery.

And a new elevator will also need to be installed to accommodate office workers and visitors to the site.

Renovation work on the Whitewear building is slated to get underway in October with a projected completion date of August 2020.

Ed Mirvish himself has said he hopes the renovation will help facilitate the “realization and fulfilment of my vision for Mirvish + Gehry Toronto.” To learn more visit mirvishandgehry.ca